In the summer of 1979, the Eisworths embarked on a 3-week-long ‘vacation’ (referred to by my Dad as The Trip from Hell). The final destination was a medical conference in Warren, VT. I think my parents optimistically thought this would be an ideal opportunity to show us all the historical landmarks between Zachary, LA and Vermont. Dad always loved history, and so on this trip he tried to hit every Civil War battlefield he could.

We made the trip in a green and white 1977 or 1978 Dodge Van which you can see in the pic. Todd later became renowned in high school for driving this same green van with the windshield wiper fluid jets pointed outward (for assault purposes :P)

Grandma Arnold accompanied us on the trip, so there were 7 of us in the van for 3 weeks. In an effort to cut down on bathroom stops, my parents purchased and installed a portable camper toilet that went in the back of the van. It was green so it matched the van….always riding in style.

The second row bench seat was removed and Dad built a wooden L-shaped bench in the back of the van to replace the missing seating. The new bench provided space underneath for storing suitcases and where little brothers could hide and play. There were no seatbelts…it was the 70’s. At the lower end of the L in the rear of the van, there was a hinged portion that could be lifted to reveal the toilet.

Mom made green gingham-covered foam cushions for the bench and put matching curtains on the windows of the van. There was a “modesty” curtain the occupant of the toilet could pull around themselves. I remember the toilet made an awful suctioning sound when it flushed…it wasn’t really a flush even…it was just a series of disgusting slurps.

The “modesty curtain” wasn’t really designed to stay in place when negotiating the twists and turns of the Blue Ridge Parkway at speed. Grandma didn’t get the privacy we all would have preferred….

As an adult with kids of my own, I cannot even imagine making a trip like this!

It was the year of the Iranian revolution, and that disrupted gas supplies in the US. We were in Pennsylvania when gas rationing went into effect, and the crazy gas situation was why we stayed away from NYC and Philadelphia.

One of the stops on the 3 week long Eisworth Family “Trip from Hell” to Vermont was Washington D.C.

Mom had planned the trip out and arranged for us to stay in a refurbished apartment building she found called “The Presidential Gardens Motor Hotel” in Alexandria, VA. When we arrived, it was really shabby (compared to what was expected) and in a sketchy part of town. She said it felt a bit like the low-income housing projects in which she and Dad had lived in New Orleans while he was in medical school. I believe the exact terminology was “Glorified Projects”.

Todd remembers that Mom and Dad had the brochure for the place and complained to the owners about false advertisement! Each suite was named after a President, and Dad joked that they should name them after the “bad presidents”.

These should be named after Fillmore or Harding instead of Washington and Lincoln!

The place had a kitchen where Grandma Arnold made dinner, and they made the best of it because it would have been too expensive to move to a hotel and still be able to feed everyone. Mom can’t remember how she found the place, and I have no idea how you found places to stay before the internet…I guess a travel agent or travel magazine – ?

The picture of the place doesn’t look that bad to me, but I think a lot may have had to do with the sketchy neighborhood feeling since we had to walk a couple of blocks from public transportation back to the apartment.

Mom arranged with Representative Henson Moore‘s office to visit him while we were in Washington, D.C. In the picture below, Asher and Seth are doodling on the Panama Canal Treaty document in Representative Moore’s office. 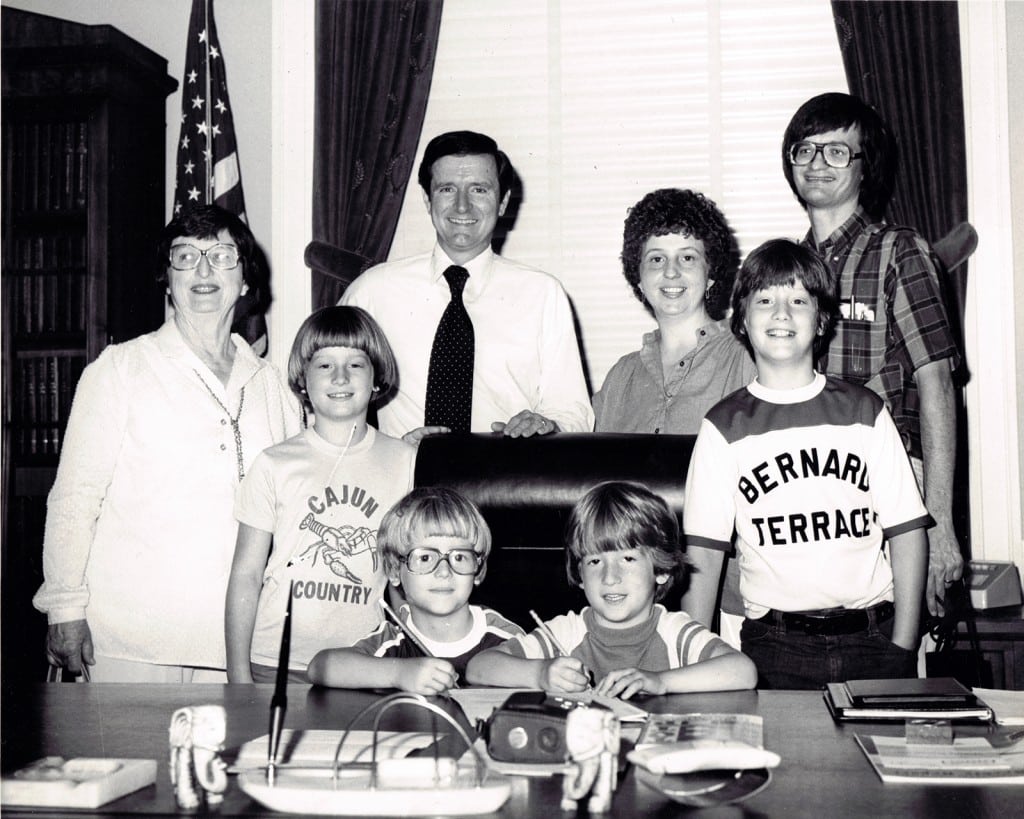 In Warren, VT, we stayed in a condominium at “The Bridges” which is still there today. In the picture you can see what looks like some ski slopes in the distance.

I have a memory of us kids wandering down the side of the mountain and finding a large rock outcropping overlooking a valley. As a kid from the very flat state of Louisiana, the drop-off seemed scary, and I remember worrying that Asher and Seth might fall off.

Other Memories from this Trip

More Pictures from this Trip 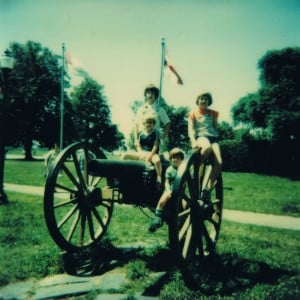 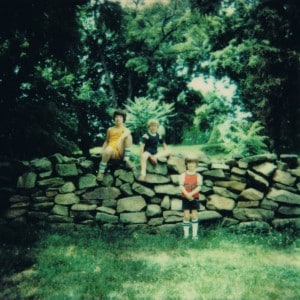 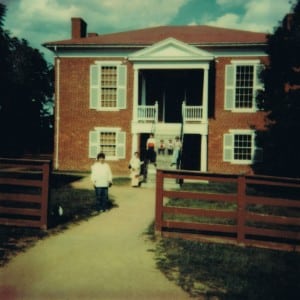 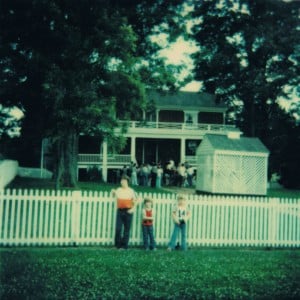 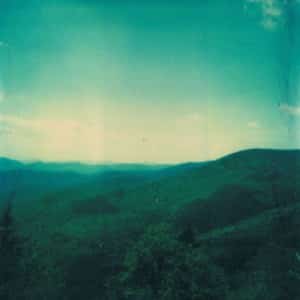 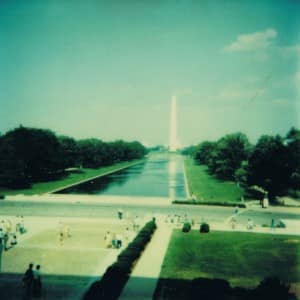 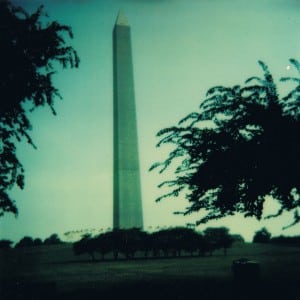 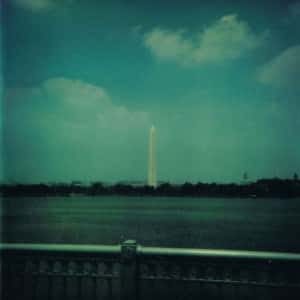 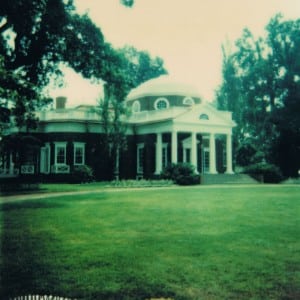 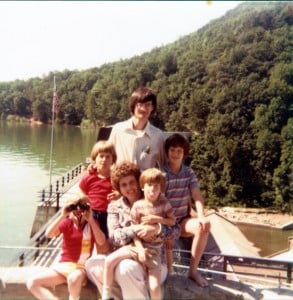 Asher sticking his tongue out! 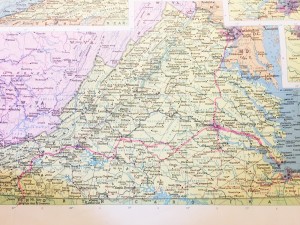 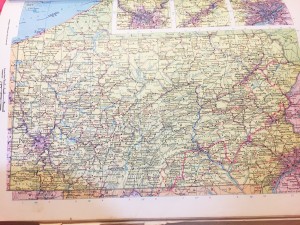 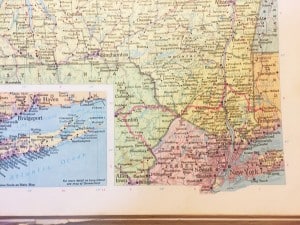 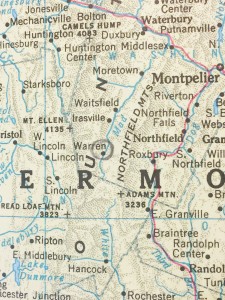